The History of Captioned Phone Technology for Hearing Loss

How CapTel captioned phone technology for hearing loss evolved from years of experience with text telephones. 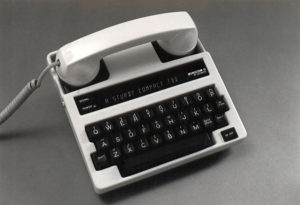 But how did the invention of CapTel come to be, and how has the technology evolved over the years? Take a step back in time to learn about the origins of CapTel captioned phone technology for hearing loss here.

1970s
Long before mobile phones or the Internet, Robert Engelke was a graduate student in electrical engineering, conducting research on a project that also involved several people who were deaf. Observing the limitations they experienced as a result of being cut off from the phone, Rob invented a portable electronic text telephone that enabled them to type messages back and forth over phone lines. Thrilled, his colleagues with hearing loss asked for more devices to be able to communicate with family members and friends. Word spread about Rob’s work in the deaf and hard of hearing community, and soon he was making text telephones full time. Ultratec was born.

At that time, telecommunications devices for the deaf/text telephones (TTYs) were very large and cost between $650-$1000, making them a luxury item that very few could afford. Recognizing telephone access is a necessity, not a luxury, Ultratec created the small Minicom TTY for less than $200. For the first time ever, deaf families could afford more than one TTY, allowing them to communicate with family members and friends in different cities.

1980s-1990s
TTYs continued to be the primary telecommunications technology available to Americans with hearing loss throughout the 1980s and ‘90s. During this period, Ultratec introduced several advancements in TTY technology, from the SUPERPHONE – the first device with memory, voice output, and touch-tone input – to the SUPERCOM – the first low-cost, fully-featured TTY available. Near the end of the 1980s, Ultratec developed a large visual display for TTY users with low vision and a voice carry-over technology that allowed a person to use his or her voice to speak directly through the relay service. Ultratec grew to become the world’s largest developer of TTYs, serving people worldwide who were deaf.

Recognizing that it wasn’t only the deaf community, however, that needed equal access to the phone, Ultratec next invented the Captioned Telephone, or “CapTel” for short. The original CapTel captioned telephone was an analog telephone with captions appearing on the phone display screen. For the first time ever, this breakthrough allowed people with hearing loss to see word-for-word captions of what the other person was saying during their telephone conversation – giving them the confidence to communicate over the phone, knowing they’d be able to read anything they were not able to hear. 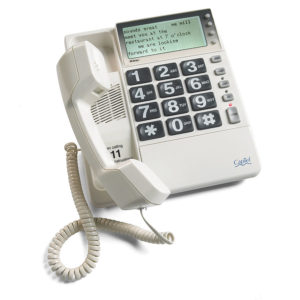 CapTel worked closely with consumers in state-by-state trials to evaluate the service, collect feedback, and fine-tune the technology. By 2003, the FCC approved CapTel captioned phone technology for use nationwide, enabling individual states to offer CapTel as part of their relay services. During this time, 2-Line CapTel was also introduced to give users even more flexibility and control.

CapTel next introduced an IP-based version of the CapTel service, enabling people to take advantage of high-speed Internet to receive captions during their calls. In 2006, IP-based CapTel service was approved by the FCC, paving the way for the exciting technology to be available nationwide. 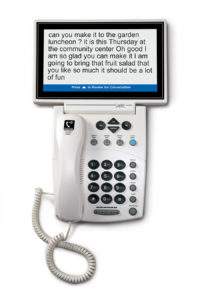 As technology evolved, CapTel introduced models with a larger screen size to show more captions at one time – the CapTel 800 and the CapTel 800i. In 2012, CapTel released the CapTel 840i model, the first captioned telephone with a built-in answering machine that provided both voice messages and captions. CapTel 840i was also the first phone to work with WiFi.

Recognizing some users had difficulty seeing as well as hearing, CapTel next offered the CapTel 880i in 2013. The CapTel 880i captioned telephone features an extra-large display screen, a variety of font sizes, and is ideal for people with low vision.

Shortly after that, CapTel introduced the CapTel 2400i – a contemporary, touch-screen model that offers the largest screen, an easy to follow menu system, and advanced sound quality features.  CapTel 2400i was the first captioned telephone to provide Bluetooth wireless technology, enabling people to connect wirelessly to Bluetooth headsets, assistive devices, hearing aids, and even cell phones. 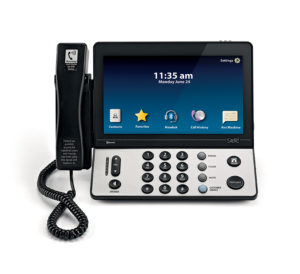 CapTel captioned phone technology continues to evolve to help people with hearing loss connect to family and friends over the phone all over the country. Today, captioned telephone service is the largest program offered by Relay Services. With continual advancements on the horizon, CapTel remains the industry leader, developing new innovations and partnerships with consumer groups, government agencies, service organizations, and hearing loss professionals to advocate on behalf of those with hearing loss.

If you or someone you know could benefit from a CapTel Captioned Telephone, reach out to us online or call us today at (800) 233-9130 for assistance.