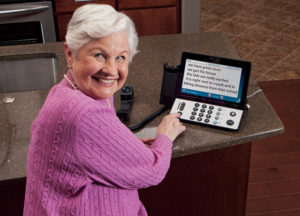 CapTel® Captioned Telephones show captions of everything your caller says – like captions on TV for your phone.

AURORA, Neb., Oct. 27, 2017 /PRNewswire/ — A new case study published by the LeadingAge Center for Aging Services Technologies (CAST), reveals that residents in senior living communities who use captioned telephones are less likely to experience the adverse effects of loneliness.

The case study is part of a newly released white paper that includes several studies illustrating the uses and benefits of social engagement and connectedness technologies within aging services organizations. LeadingAge unveiled the white paper on October 19th highlighting a set of tools and insights on the latest technology to aid older adults.

According to LeadingAge, “Social isolation is consistently associated with reduced well-being, health, and quality of life, as well as negative psychological outcomes such as depression. The negative impact is a health concern for people of all ages, but becomes more pronounced as people age. Its prolonged health risk is significant, matching the effect of smoking 15 cigarettes a day!”

In the case study, “Increasing Engagement, Social Networks and Quality of Life and Reducing Social Isolation, Depression and Feelings of Loneliness through a Captioned Telephone,” qualifying residents of Life Care Services (LCS) living communities – a national senior living community operator – were provided Hamilton® CapTel® captioned telephones for use in their personal living spaces. Hamilton CapTel captioned telephones make it possible to listen and read word-for-word captions of everything said to a user on the phone, similar to captions on television.

The study illustrated that restoring the ability to use the phone without frustration increased residents’ likelihood of social connection. According to the Harvard Study of Adult Development, this can lead directly to better physical health, increased brain and memory function and ultimately longer lives.

LCS Director of Community Life Services Ashlie Burnett said, “[Residents with hearing loss] become withdrawn and they isolate themselves. But when we…break down the barriers that their hearing loss puts up…it does improve their quality of life.”

Hamilton CapTel will present the case study findings to attendees of this year’s LeadingAge Annual Meeting & Expo on October 29th, and will also have a presence in the ‘Day in the Life – My Place’ exhibit throughout the event. At the exhibit, attendees will have the opportunity to see Hamilton CapTel’s captioning technology in use and ask questions. The LeadingAge Annual Meeting & Expo runs from October 29 to November 1, 2017 at the Ernest N. Memorial Convention Center in New Orleans, Louisiana.

Meanwhile, the technology is making an immediate impact at LCS communities across the country. Resident and case study participant Mary Ann Schellhardt’s Hamilton CapTel phone has made a profound difference in her life. She says, “I don’t know how I did without it!”

About LeadingAge CAST: The LeadingAge Center for Aging Services Technologies (CAST) is focused on accelerating the development, evaluation and adoption of emerging technologies that will transform the aging experience. As an international coalition of more than 400 technology companies, aging-services organizations, businesses, research universities and government representatives, CAST works under the auspices of LeadingAge, an association of 6,000 not-for-profit organizations dedicated to expanding the world of possibilities for aging.

Hamilton CapTel is a service partner of CapTel.

CapTel is a registered trademark of Ultratec, Inc.